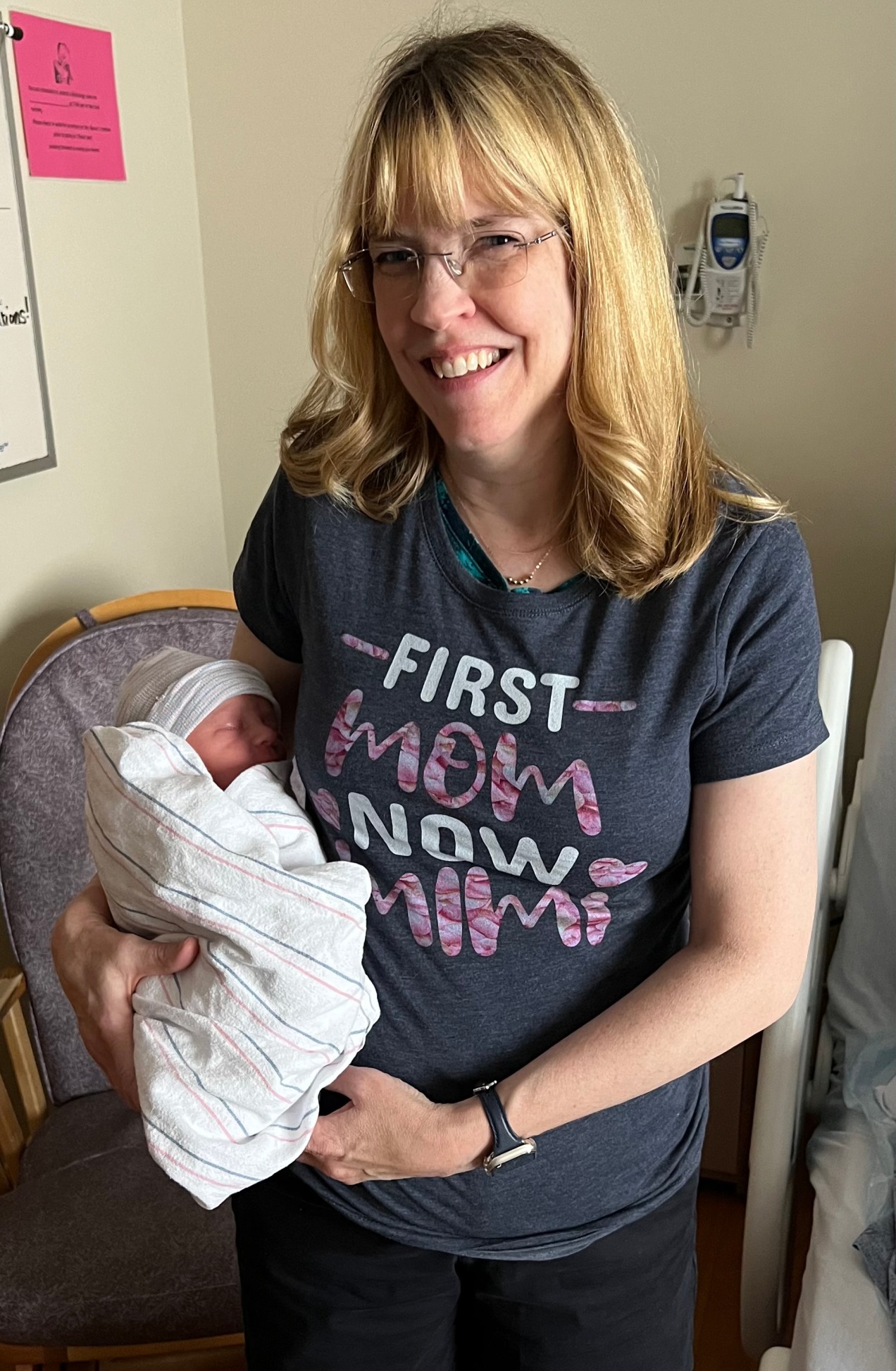 23 years since I last held a baby that was only hours old. People don’t seem to often talk about what it’s like…the moment you become a grandparent. When people hear you are going to become a grandparent, they smile a soft sort of smile and tell you, “there’s nothing like it!”.

But nobody mentioned how I might feel when I first held him in my arms. I found it to be surreal. Wonderful…and very confusing. This baby was not mine, but also somehow a part of me. As I held him, I looked over at my daughter lying in the hospital bed and my son-in-law standing beside her and I knew this baby was theirs. But the last time I had held a baby that had just been born, it was my own. Five times I held my own newborn babies and now fast forward 23 years and I was holding this little person. And he was both my own and not my own.

Holding him ignited something inside of me. Something I hadn’t felt since my last child was born. A fierce mother bear feeling bursting with a love so strong that it made me want to protect him. But he wasn’t mine to protect. Not in that mother bear sort of way at least. I was going to need to learn a new way to love and protect. A softer way. A grandmotherly way.

For the first couple of months every time I held him, I would remind myself he wasn’t mine. In case this sounds crazy, let me clarify. I knew he wasn’t mine. I did not long for him to be mine. But having raised five kids, I was familiar with one role. The role of mother. I was proficient at mothering. Mothering was a role I had lots of practice in and when that little baby was in my arms, the instinct was to mother him.

But he was mine, not mine.

He had a mom and a dad, both of whom were doing a great job. So what was my job?

I had heard of some of the grandmother job requirements….at least the stereotypes. Look matronly, wear an apron, bake cookies. Be soft, safe and comforting. Grey hair up in a bun on the top of my head. The list goes on. But much of that list was more a caricature of a grandparent than the real thing.

I had also heard things grandparents said about grandparenting. Things like: ‘It’s a second chance!’ ‘It’s like parenting but without the same stress and you get to send them home at the end of a visit!’ ‘You get to spoil them!’ And although I liked some of those ideas, they still didn’t really help me figure out what my role was supposed to be. Each time I held him, I reflected on my new title of grandmother and the role that came with it.

I would think things like: I am a grandmother to a grandson. Hmmm. Boys can be a handful. What do boys need? I had a great example with my own mom. My oldest son could be a handful when he was young. His antics would get his grandfather and uncles annoyed. But often as we were leaving their house, my mother would stop him at the front door, take his face in her hands, say his name and then tell him, “You’re a good boy!” She wasn’t negating all the annoying things he had done. She was reminding him that she saw the goodness in him too. She knew he was much more than the sum of his annoying antics. And she reminded him of what she saw in him every chance she got. That’s the kind of grandmother I want to be. I want to be there to remind him of his value. Even in those times both when he devalues himself and when the world sends him messages that could try to rob him of his value.

He’s nearly 7 months old now. I no longer struggle with my role. I’ve come to appreciate the mine, not mine status. There is a truth to it. He is mine, in that he is my grandson. He is both an extension of my husband and myself and someone new created by my daughter and her husband; he is theirs. These connections give me my status. He and I are connected, forever grandmother and grandson.

When I spend time with him I am filled with awe and wonder. It’s the same awe and wonder I felt with my own children. But I am no longer striving to raise a family. I’m able to enjoy him without the pressure of the daily responsibilities for him. It doesn’t mean I don’t worry for him. I know the world my own kids had to navigate as they grew. He will face those things as well. I hope I am able to be around for a long time, making sure that he knows he’s a good boy. As his grandmother, I see it already and I will never let him forget.

So I’m writing my own Grandmother job description. A description that includes seeing him through eyes of awe and wonder. Appreciating him and showing and telling him that his grandmother loves him. And maybe someday, the requirements might include baking cookies and my hair turning gray. But for now I’ll be content with being amazed by each new thing he does. To be a soft, safe place might just be the greatest gift I could give my grandson and any future grandchildren that come along.

The distinction of him being mine and not mine may continue to surface from time to time. But I am settling in quite happily to my new role. And like seasoned grandparents had promised, there is indeed, nothing like it!